~ DARE to BE DIFFERENT... but always BE YOURSELF! ~

Love Rain is a Korean drama that depicts a 1970's pure love and a love from the present day at the same time. It shows how the offsprings of a previous ill-fated couple, who met in the 1970s, managed to meet and fall in love. Seo In Ha and Kim Yoon Hee, an art student and a shy beauty, met and fell in love with each other during college in the 1970s, but unfortunately their love was fated to never be. Now in the present 21st century Korea, Seo In Ha's son, Seo Joon (a liberal photographer) meets and falls in with the daughter of Kim Yoon Hee, Jeong Ha Na, a cheerful and energetic girl who's personality is different from her mother's. Will their love for each other keep them together or will they have to face the same fate as their parents? 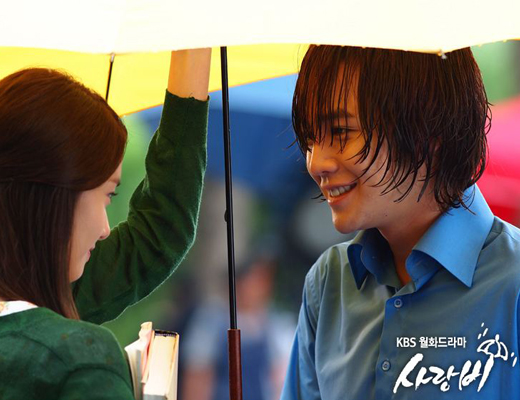 Eight episodes into the drama and it had me pondering on times past and present. I was comparing "eras" and coming to some realizations of sorts, nay, eye openers.  They are not realizations in the strict sense of the word, for these are things that we actually know about but have not really paid attention to or given much thought.  Though the drama dealt mostly on the topic of love and will play around with your emotions, I think it did not fail to strike a familiar chord in everyone.

First off, the laid back life in the 70s era is a stark contrast to the fast paced and so-called digital era of today. I kinda wish I can go back to that time when each and every moment of life seems to be savored, revered and treasured; wherein the sincerity and simplicity of pure love can be seen and experienced.  I am not saying that this is not possible at this day and age.  It's just that it is quite rare and hard to come across with nowadays.  Come to think of it ~ finding that one person, among millions all over the world, who completes you (cliche as it may sound); and regardless of time and space, still makes your heart do flips and somersaults, is something short of a miracle.  Yes, love... and I mean true love, can do that to you.

Love often comes in unexpected ways, places, and circumstances (It did to me!).  You don't have to go looking for it (especially to those who think they are doomed to single-blessedness... but then again, what's wrong with that?!).  Anyway, what I meant to say was, love will come to you.  At times, it is so simple yet abrupt and will stop you dead on your tracks but you know in your heart, without a doubt, that this is it (like in the case of Seo In ha) or unexpected and extraordinary that it's staring you right in the face and you don't even realize it, or choose not to acknowledge it (like what happened to Seo Joon).  But whichever way it is, true love stands the tests of time.

Seeing the difference of how love is in the two eras, it was somewhat an eye opener. In this modern life where it often takes a back seat, the rarity and scarcity of finding love in its purest sense is quite glaring. And those who did, but have been so caught up in the complexities of the times, often take for granted that which has brought them together in the first place, and the reason why they stayed together through the years. Cheesy, I know!  But I guess LR has that effect on me.  I am a hopeless romantic (or so I think I am) and it breaks my heart that it seems selfless and unconditional love has become the exception rather than the norm, or it could just be me.

Another thing I've come to realize, and this is something that is often overlooked, is that life, no matter how unfair it may seem, presents a lot of second chances. So when you get your second chance, seize it, hold on to it, and fight for it!  Chances are, if you did not win the first time, you will this time around.  And if you still don't, it is not meant to be (or I'd like to believe that greater things are bound to happen).  The point is, at least you tried your damnedest best and hardest and learnt the lessons along the way.  After all, that is what matters the most.

Well, I guess this is just the start of more realizations-of-sorts for me 'coz the drama presents a lot of ideologies, perceptions, and realities of Life and Love, which is why I am hooked on it; and not to mention the fact that it's top-billed by the one Hallyu star who is, and forever will be, first in my heart.  As the drama progresses, I will share more of them here.

iamKIM
dreamer, lover, fighter, survivor, and... a child at heart!